SOLVE4BHARAT, The Annual 24-Hour Hackathon By PanIIT Sees Participation Of 57 Teams From Across India 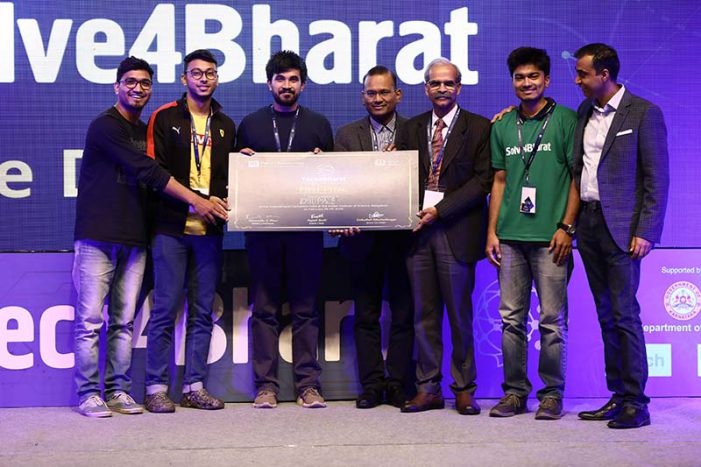 ‘Solve4Bharat’, the annual 24-hour hackathon by PanIIT in Bengaluru showcased innovation, problem solving and product development skills of the participants across 3 focus areas – 1. Urban Development and management, 2. Wearables and Tech for HealthCare and 3. Education and Awareness. 57 teams consisting of over 300 participants from across India participated in the hackathon. The participants were mentored by 28 experts from the industry, their solutions judged by 12 jury members andthe winning teams were awarded prizes at the valedictory function at PanIIT’s Tech4Bharat 2020.

Mr. Gaurav Gupta, Principal Secretary, Govt. of Karnataka made a keynote speech on ‘Policy Meets Technology’. During his speech, he emphasised that “It is a step in the right direction that PanIIT has launched Tech4Bharat and Solve4Bharat. A lot of unsolved problems in India, particularly rural India. Each of these problems provide opportunities for enterprise. The digital technologies and also the increasing digitisation of services like Aadhaar based validation, digital payment, mobile and broadband services provide opportunities for enterprises to be set-up which can solve problems and yet can be profitable and can scale up quickly.”

The winning team Drupples, a 4-member team from Army Institute of Technology, Pune won Rs. 4,00,00 for their solution – Dobbin. It is a platform to enable education in rural areas. It aims to solve the ad hoc nature of volunteer teachings from urban areas and also counter other problems like live classrooms across a bandwidth as low as 1kbps. It has real-time multilingual translation and teacher quality assessment.

1st runner up were a team of 5 from Atharva College of Engineering, Mumbai called ‘Trial & Error’ earned themselves Rs. 2,00,000. ‘Vani’ a mobile application that promotes handsfree interaction for the doctors that blankets NLP and medicine suggestion by using speech to text converter to maintain electronic health records.

2nd runner up was a single-member team called Tech-Nauts from Army Institute of Technology, Pune and won Rs. 1,00,000. He developed and 3D-printed a device that can detect the species and gender of a mosquito to further declare if the mosquito is infected or not.

Ten other team received a consolation prize of Rs. 10,000 each.

PanIIT Alumni India (PIAI) has conceived Tech4Bharat as a strategic event to review and realign the current initiatives and launch fresh ones. The event featured engaging panel discussions bringing Academia, Policy makers and the Industry leaders. The expert panel moderators from PanIIT led the discussions to gather the diverse views and galvanize them into a common pursuit of excellence for our fine institutions of technical education.

PanIIT is an association / confederation of IIT Alumni Associations and of IIT Alumni. PanIIT was formed to build the brand IIT and take on work that was nationally relevant.

Since its formation, PanIIT has identified the projects that it takes on through the PanIIT Conclave, a bi-annual event, where a topic of national interest and impact is taken up, discussed, opinions taken from external experts from the domain, industry, society and government. Thereafter, the proceeds are analysed to draw out actionables in the form of an Outcome Report of the Conclave, and submitted to the Ministry of HRD, and from which PanIIT takes up one or two as their own initiatives.Some of the notable initiatives are undertaken under the Reach for India initiative of PanIIT (PARFI). PARFI has been involved in vocational skill building in various states in conjunction with the state and placing the trained people with organisations in a demand-supply model.

SOLVE4BHARAT, The Annual 24-Hour Hackathon By PanIIT Sees Participation Of 57 Teams From Across India added by admin on March 2, 2020
View all posts by admin →