Republic of Korea expresses interest in expanding footprint in Odisha 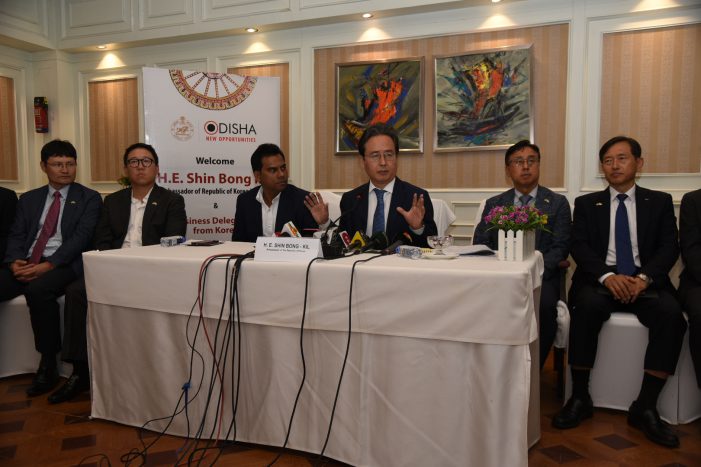 Korean HE Shin Bong-Kil, Ambassador of the Republic of Korea to India expressed his interest in expanding Korean industries footprints in Odisha.

The delegation which consisted of Indian head honchos of Korean brands like Hyundai, Kia Motors, Samsung, LG among others were enlightened on the ease of doing business in Odisha and about various incentives and infrastructure facilities provided by the government by presentation with Korean text by Dr. Nitin Jawale, MD,I PICOL, which was appreciated by the business delegation.

Honorable Chief Minister Naveen Patnaik said: “It gives me great pleasure to host the Korean delegation. We have envisioned our industrial growth in six focus sectors and we are striving to facilitate the growth by providing a conducive environment for industries. Korea and Odisha have many opportunities to collaborate in these focused sectors and further strengthen trade, investment, and cultural relations.”

H. E Shin Bong Kil said:  “This is my first visit to Odisha and I would like to thank Odisha government for such a warm welcome and arranging this meeting. This Korean Caravan is a business delegation to explore the opportunity of business investment in the state. The second objective is to strengthen cultural ties. We want to make a fresh start. The presentation was very impressive and gave us an idea of the vast potential of this state. The Odisha government is very passionate and that speaks volume”

The delegation also paid a visit to the Industrial estate of the state – Info Valley II, Khurda Industrial Estate. They were further shown the land which has been envisaged to be developed as the Korean Industry cluster.

Republic of Korea expresses interest in expanding footprint in Odisha added by admin on September 24, 2019
View all posts by admin →