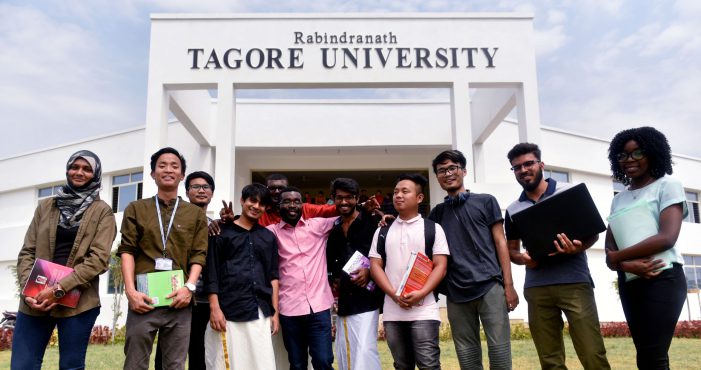 The Rabindranath Tagore University (RNTU), which is under the aegis of the prestigious AISECT Group of Universities, has announced the Shiksha Mitra Scholarship Scheme for the 2020 academic session. The scholarship scheme is applicable for both undergraduate and postgraduate courses and around ₹50 lakhs worth of scholarships are awarded under the scheme each year in the form of fee waiver.

Highlighting the primary objective of the scholarship scheme, Mr. Santosh Kumar Choubey, Chancellor, RNTU, said, “RNTU was established in 2010 with the mission to provide world-class education and to improve access to skilling facilities in the backward regions while keeping the affordability quotient in mind. The Shiksha Mitra Scholarship Scheme is yet another way to further the accessibility and affordability for students coming from underprivileged backgrounds. The aim remains to provide everyone the opportunity to be a part of a holistic learning environment, acquire the necessary skills and build a secure future for themselves.”

Launched in the year 2011, the Shiksha Mitra Scholarship Scheme is the largest university-aided Scholarship Program at the state level. More than 7,500 students have benefitted from the scheme till date. The last date for submitting an application for the scholarship is 15th August 2020.

Following are the details of the Shiksha Mitra Scholarship Scheme 2020:

As a skills university, RNTU focuses extensively on garnering entrepreneurial spirit among students. It is the only private university in Madhya Pradesh to set up Atal Incubation Center by Niti Aayog so as to strengthen the startup ecosystem. The University has also established a Pradhan Mantri Kaushal Kendra to provide students hands-on experience in skills. Along with this, RNTU has contributed towards the establishment of 16 start-up ventures for entrepreneur programme with Young India. The University also has collaborations with various international universities and corporates from countries like USA, Australia, Korea, Taiwan, Ukraine and Nepal to provide an expanded network for education and skill-development.

RNTU has set up 9 Centers of Excellence in Art & Culture, Earth & Space Sciences, Environmental Science, Agriculture, Renewable Energy, Advanced Material, Innovation in IoT, Science & Communication and Incubation, Entrepreneurship & Start-ups. RNTU is approved by AICTE, NCTE, BCI, INC, MP Paramedical Council and DEB (UGC) and holds an impeccable placement record with over 300 companies and offers that scale over ₹10 lakh/annum. All scholarships provided by RNTU are based on merit and are awarded on a first come first serve basis. Students can look up for more information on the subject on the University’s website https://rntu.ac.in/.

Rabindranath Tagore University to offer scholarships worth ₹50 Lakhs under the Shiksha Mitra Scholarships Scheme added by admin on June 15, 2020
View all posts by admin →