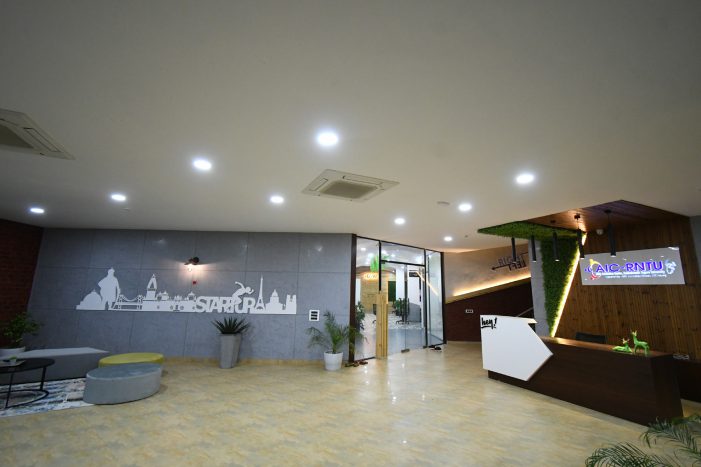 In a bid to boost the startup ecosystem in the country, Rabindranath Tagore University launches Madhya Pradesh’s first Atal Incubation Centre within a private University

Bhopal-based Rabindranath Tagore University (RNTU), which is India’s first skills university, has launched Madhya Pradesh’s first Atal Incubation Centre (AIC) within a University campus. AIC-RNTU is supported by the Atal Innovation Mission (AIM) under NITI Aayog, Government of India. It has been launched with the aim of boosting the startup ecosystem in the country by providing access to state-of-the-art-infrastructure, fund support, management support, mentorship and relevant training to budding entrepreneurs. The Centre was inaugurated by His Excellency Mr Lalji Tandon, the Honorable Governor of Madhya Pradesh.

Talking about the need for AIC-RNTU, Mr Santosh Kumar Choubey, Chancellor, RNTU, said, “Around 90% Indian startups fail within the first five years of inception. With the establishment of AIC-RNTU in Bhopal, we are looking to transform the startup ecosystem in the country by playing the role of an incubator and an accelerator, to enable the startups from ideation to growth stage. It will not only play a crucial role in developing entrepreneurial mindset among the youngsters of the region but also help in creating long term financially sustainable solutions while generating employment opportunities.” Mr. Choubey also announced corpus fund of Rupees 1 cr for seed funding of startups of the region.

AIC-RNTU will work towards nurturing innovative startup businesses to help them become scalable and sustainable enterprises. In its role as a startup incubator and accelerator, AIC-RNTU will provide world-class incubation facilities with suitable infrastructure in terms of lab equipment and operating facilities, coupled with the availability of sectoral experts for mentoring the start-ups, business planning support, access to seed capital, industry partners, trainings and other relevant components required for encouraging innovative startups.

Through this Centre, incubation programmes will be offered for three categories  – Ideate, Discover and Growth. The durations of the programmes will range from 8 to 12 months based on the category. AIC-RNTU has forged collaboration with subject matter experts, Mentors, Corporate Partners, Investment Partners and Academic partners to provide comprehensive support to the young entrepreneurs. AIC-RNTU has also build state of the art 100 plus seater co-working space. In addition to above,  AIC-RNTU also offers joint Incubation program in partnership with the Tata Institute of Social Sciences (TISS), Mumbai.

Adding further on the importance of AICs, Mr Choubey said, “Madhya Pradesh is the second largest Indian state and is among the fastest growing states, yet it lags behind Maharashtra, Karnataka, Delhi and Uttar Pradesh in terms of number of recognized startups. The State has a lot of potential but there is a need to establish more AICs in the tier 2 and tier 3 cities in order to provide the much needed boost to the Indian startup ecosystem.”

Atal Innovation Mission (AIM) is Government of India’s flagship initiative to promote a culture of innovation and entrepreneurship in the country. AIM’s objective is to develop new programmes and policies for fostering innovation in different sectors of the economy, provide platform and collaboration opportunities for different stakeholders, create awareness and create an umbrella structure to oversee innovation ecosystem of the country.

Rabindranath Tagore University (RNTU), formerly known as AISECT University Bhopal, was established in Raisen district of Madhya Pradesh in 2010 as India’s first skills university. In a short span of time, RNTU has established itself as the leading educational and research hub of Central India. The University seeks to provide overall cognitive development to its students by laying an equal focus on soft skills, personality grooming, entrepreneurship incubation, liberal & performing arts as well as sports and cultural activities.