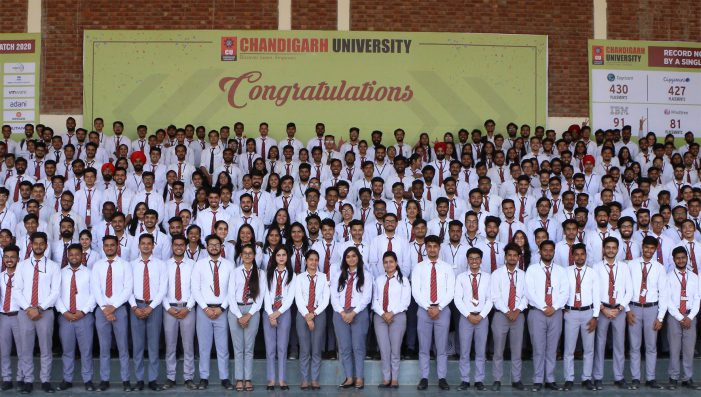 With India ranking 3rd globally in the production of medicines and largest producer of generic medicines, the pharmaceutical sector of the country has grown in leaps and bounds during the last two decades. Attributing to the growth of Indian Pharmaceutical Industry, the number of jobs in the sector has seen a big surge which can be verified from the fact that more than 80 Multi-National Companies have recruited 300 Biotechnology and 150 pharmacy students of Chandigarh University. The placements data was released by Vice-Chancellor, Chandigarh University, Dr. R.S.Bawa.

While giving details about the placements, Dr. Bawa said, “Recruitment of pharmacy and biotechnology at Chandigarh University have witnessed a surge of 20% during the last three years and the number of offers has also seen a jump of 15%.” Vice-Chancellor further added, “Top pharma companies like Abbott Pharmacy, Cipla, Johnson & Johnson, Wockhardt, Torrent Pharma, Glenmark, IDS Infotech, OMICS India, Panacea Biotech have been the major recruiters of the Biotechnology and Pharmacy students and IDS Infotech and OMICS India have emerged as the top recruiters with 14 and 12 selections respectively.” Fortis Hospital, Medanta, Apollo Hospitals, Jaypee Hospital, Dr. Lal Path Labs are some of the healthcare sector companies which have offered placements to the students of Chandigarh University, Vice-Chancellor added.

“Our Biotechnology and Pharmacy students are doing exceptional work in research and have managed to file 25 patents in the field of Medical Instruments, Formulations & Medical Compounds for Asthama & Cancer Drugs and others during the last five years,” said Satnam Singh Sandhu, Chancellor, Chandigarh University. “This has encouraged the global giants like Abbott Pharma, Cipla, Wockhardt to offer jobs to our biotechnology and pharmacy students as they are well acclimatize to the working culture of the Global Pharma Industry,” he added.

Chandigarh University is a NAAC A+ Grade University and an autonomous educational institution approved by UGC and is located near Chandigarh in the state of Punjab. It is the youngest university in India and the only private university in Punjab to be honored with A+ Grade by NAAC (National Assessment and Accreditation Council). CU offers more than 109 UG and PG programs in the field of engineering, management, pharmacy, law, architecture, journalism, animation, hotel management, commerce and others. It has been awarded as The University with Best Placements by WCRC.

Pharmacy and Biotechnology Students of Chandigarh University Gets Placed in Top Pharmaceutical Multinationals added by admin on May 27, 2020
View all posts by admin →