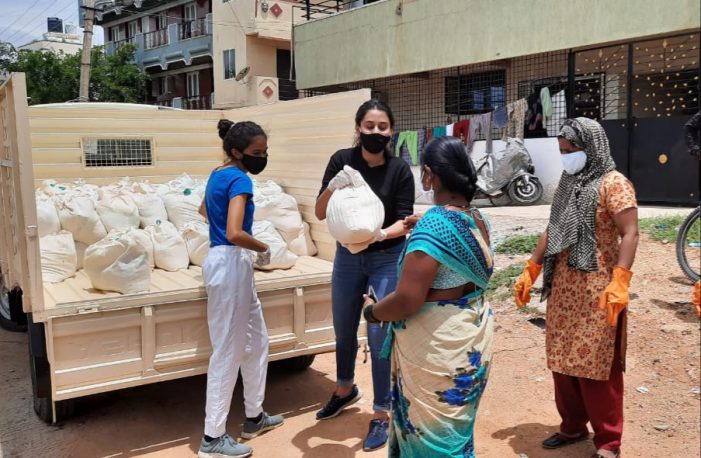 Ration Square has raised around 8,350kgs of ration for the needy

Bangalore, September 09, 2020: The nationwide lockdown to combat Coronavirus outbreak in the country has led to severe difficulties for the poor and homeless, migrant people and daily wage workers. In an effort to help the needy, Greenwood High International School Grade 12 student Anvi Mittal, founded the organisation Ration Square, a student-led initiative that provides ration kits to migrant labourers during the current pandemic. Ration Square has raised around Rs 4.5 lakhs for the cause and distributed 8,350 kgs of ration in slums across eight locations in the city till date. The initiative, launched with the help of Vice Presidents Christina Paul and Riddhi Bansal, is an ongoing one with the organisation most recently distributing rations to migrants in and around Whitefield. Anvi partnered with Good Neighbours India and Samridhdhi Trust, both NGOs, who helped her identify the needy families to whom the ration was supplied.

Anvi, the founder of Ration Square, described why she was inspired to set up the organization to help the needy:  “I saw the news of young boy who refused to leave the side of his dead friend, who had died after having walked for 500 miles without food and water. I felt horrible and compelled to look beyond my frivolous needs and demands. I started reading online about the condition of migrant laborers and what I could do to help. After some contemplation, I decided to reach out to the parents of my school, Greenwood High, with the help of my school authorities. I requested them to pledge ration kits of INR 500 each which contained 10 kgs of ration. Within two days, I was surprised and pleased to receive overwhelming pledges for kits. I realized then, that most people wanted to help and contribute to such causes, but were unaware of credible and reliable sources. That’s how Ration Square was born.”

Anvi negotiated with local grocery store owner for a good mix of ration for each kit. The store owner not only managed to source the quantity mix within her budget, but also offered her his godown for packing and storing. Then the kits were packed and loaded onto a truck for dispatch of the ration across multiple locations. Each kit contains pulses, rice, cooking oil, sugar, salt, turmeric powder and chilly powder. The first location Anvi went to was a slum located in a tiny area in Whitefield where there were huts that had very little sunlight and ventilation and 10-15 people cramped up in a single room. The ration was distributed, and the last kit at the distribution centre was give to a child of 6 or 7 years, who was struggling to just hold the 10 kg bag.

“I came home realizing just how privileged we are and also the responsibility that comes along with it. It has taught me to respect and value money and to understand the difference between necessity and need.” added Anvi.

Speaking on the initiative of the Greenwood High students Ms. Mom Banerjee, Founder, Samridhdhi Trust, said, “I applaud the Ration Square team who put their time and efforts to respond to this COVID crisis with a strong enterprising initiative.”

Speaking on the initiative by Anvi, Ms. Niru Agarwal, Trustee, Greenwood High said: “We believe in inculcating values of benevolence and philanthropy among our students and Anvi has lived up to that vision. Greenwood High has always been compassionate about helping those in need and supports causes that help the under-privileged.  I would appreciate it if more students come forward and emulate Anvi’s thoughts and actions. We believe only active collaboration between all the members of the society will helps us overcome the impact of this pandemic.”

Students interested in joining the team to start a chapter of the initiative in their school or community are encouraged to get in touch with her at info@rationsquare.com  or @rationsquare (Instagram). Anyone who would like to support the cause of Anvi and contribute may contact her at the same email id or check out the website rationsquare.com.

Greenwood High student’s unique initiative a boon to migrants added by admin on September 10, 2020
View all posts by admin →